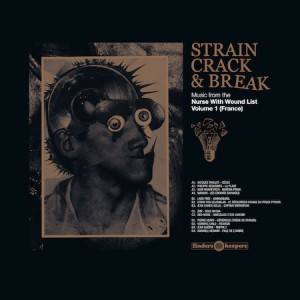 In the world of underground curios, Nurse With Wound, a 40-year-old noise project headed by British performer Steven Stapleton, is staggeringly important. The amassed esteem, in part, is predicated on a list of almost-forgotten bands that Stapleton and company included with their first release, Chance Meeting On A Dissecting Table Of A Sewing Machine And An Umbrella.

With the heft of a history textbook, the Nurse With Wound list—which places John Cage and Can alongside Steve Lacy and La Monte Young—is set to be rendered as a series of compilations, breaking down artists by country of origin. Strain, Crack & Break: Music From The Nurse With Wound List, Volume 1 (France) is the program’s opener.

The music on Stapleton’s own 1979 LP moves to capitalize on some combo of musique concrète, free improv and proto-industrial shards of sound. The result isn’t imminently listenable—and apart from a few 1990s collaborations with Stereolab, there isn’t really an entry point for casual listeners. That’s not what any of this is about, though. Instead, it’s the comp’s reified obsessiveness, completionism and the cataloging of a past that otherwise might be utterly obscured to future seekers. The NWW list certainly isn’t an all-encompassing compendium of outsider music, but still takes into consideration a wealth of sounds, pointing toward Stapleton being a pretty curious listener.

Jazz drummer Jacques Thollot—who’d done time with Don Cherry, Joachim Kühn, Krzysztof Komeda and others—opens Strain, Crack & Break with a cut from his 1971 solo debut, where he played various keyboards, percussion and electronics. The final third of the track is one of the few moments on the newly devised comp that actually swings. Sputtering synths and cut-up tape follow with offerings from Phillippe Besombes and Pierre Henry, and Horrific Child, Mahjun and Lard Free turn in some reasonably palatable prog. The rest is a miasma of sound, experimentation and skronky self-indulgence, but the good kind. Red Noise’s 15 minutes of juiced-up electric noodling and jocular jazz on “Sarcelles C’est L’Avenir” ranks among the best of what’s here.

Volume two, which focuses on the finer points of German sensationalism, is said to be in the works for 2020; the number of total installments still has yet to be determined. It’s a lot of music by any measure. But thinking to work the NWW list into LP-length projects is both a brilliant step toward the preservation of a disappearing past and an intriguing vantage point to watch Stapleton assess the guidebook he devised for experimentalists.