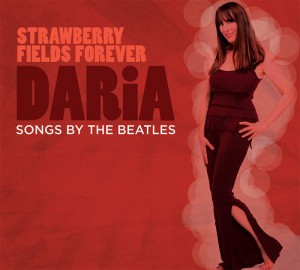 The Beatles catalogue is imprinted on the DNA of several generations of listeners, so artists may find it daunting to put together an album of covers that won’t have people tuning out after the first note.

With a formidable crew of Bay Area jazz players along for the ride, including co-arranger Sam Bevan, vocalist Daria successfully reinvents 10 Lennon-McCartney standards for the jazz idiom.

Walking bass and mellow brass flourishes open “When I’m Sixty-Four.” The arrangement uses chords that pull the melody in unexpected directions, while Daria’s phrasing (on this song and throughout the album) is marked by unusual hesitations that give a new perspective to the lyrics. When she purrs, “You can knit a sweater by the fireside,” she makes it sound like a sensual delight.

The title track is taken at a slow, smoky pace, with subtle sitar and tabla accents complementing Daria’s dreamy, soothing vocal. “Come Together” gets a samba accent, with subtle percussion and Wes Montgomery-like guitar fills supporting a vocal that slips and slides up and down the singer’s impressive range.

“Can’t Buy Me Love” has a small-combo swing, while “If I Fell” features a call and response between Daria’s vocals and the Afro-Cuban flute accents of Matt Eakle.

The stand out track is “Bird Medley,” which interpolates “Blackbird,” “Bye Bye Blackbird” and the Paul Winter/Ralph Towner tune “Icarus,” which was coincidentally produced by George Martin.

Bevan’s minimal acoustic bass introduces Daria’s poignant vocal as she slides up to a near falsetto that intensifies the longing ache at the heart of the song. Jean Michel Huré’s intricate Brazilian fingerpicking enters to join Daria as her scatted vocal embroiders the melody of “Icarus.” Jonathan Alford comes in to take a mellow solo on the Fender Rhodes before gliding into straightforward rendition of “Bye-Bye Blackbird.” And the arrangement closes with the band and Daria interposing the melodies of “Blackbird” and “Bye-Bye Blackbird.”