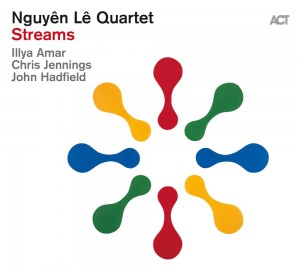 The title of Nguyên Lê’s Streams refers to the tributaries of global-music influence that the guitarist attempts to guide his quartet through. On paper, it’s an intriguing idea, one that guitar paragons like Pat Metheny certainly have employed. Unfortunately for Lê, the references to Indian, African and Vietnamese traditions are crushed by the guitarist’s smooth-adjacent sound.

Lê contributes a bevy of originals that attempt a kind of grooving funk-rock, reminiscent of Miles’ explorations; it works, occasionally. The problem mainly lies in Lê’s riffing, which aims to build beds over which he and others can improvise. There’s little development to push the music forward, though, and as a result, it often sounds like the band’s merely carrying the tunes along, rather than really delving deep into them. Streams’ real star is vibraphonist Illya Amar, by now a known quantity to Lê’s fans of the past 20 years, whose clear, fresh tone cuts through the sap and stickiness of the bandleader’s. It’d be like Gary Burton joining Return to Forever during its densest jazz-rock period, providing an ideal foil to the ensemble’s increasingly baroque work. Amar’s heavenly ringing almost makes it worth wading through the murky musical stream here. Almost.