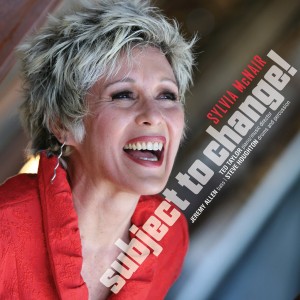 When Sylvia McNair was a classical violinist and opera singer, she won two Grammys. She was an international star, but harbored a secret desire to be a pop singer. Eventually, she quit the world of opera for the stages of America’s cabarets. Subject To Change! is her third album of standards from the Great American Songbook, and it’s a subtle stunner.

McNair belts out long, high, operatic notes on tunes like “Everybody Says Don’t,” “Tonight” from West Side Story and “Summertime,” but, for the most part, she delivers the lyrics with understated poise. Much of the album was cut live at the Aspen Music Festival, where she was joined by the talented trio of pianist Ted Taylor, bassist Jeremy Allen and drummer Steve Houghton, who add an extra dimension to the songs with their clever arrangements.

Taylor inserts a few quotes from the Gershwin canon into his introduction to “Summertime” before McNair gives the song a passionate delivery using her middle register to intensify the poignant lyric. Elsewhere, she brings jazzy, triple-time vocals to portions of “Everybody Says Don’t” and “Orange Colored Sky” that reference the vocal gymnastics of Lambert, Hendricks and Ross.

“One Hundred Easy Ways (To Lose A Man),” from Leonard Bernstein’s Wonderful Town, gets a good-humored reading, although the sexist premise—that a woman who knows as much about cars and baseball as her date will never find love—sounds a bit dated.

Her humor works better on the tongue twisting “The Boy From …,” a parody of “The Girl From Ipanema” written by Steven Sondheim and given a relaxed bossa nova treatment by Taylor, Allen and Houghton.

McNair shows off her fiddling on a couple of country tunes—“Orange Blossom Special” and Charlie Daniels’ “The Devil Went Down To Georgia.” At the end of the former, she says that no matter how much she practices, her playing never gets any better—but she’s being overly modest. McNair’s fretwork is impressive, as good as any current bluegrass fiddler you can mention.

Subject To Change!: Everybody Says Don’t; The More I See You; Sylvia’s Dilemma; Orange Colored Sky; This Time The Dream’s On Me; Love Is In The Air/Loving You; The Boy From; I Cannot Hear The City; Orange Blossom Special; The Devil Went Down To Georgia; Summertime; One Hundred Easy Ways; It’s Good To Have You Near Again; West Side Story Medley; With A Song In My Heart. (64:49)
Personnel: Sylvia McNair, vocals, fiddle; Ted Taylor, piano; Jeremy Allen, acoustic bass; Steve Houghton, drums.