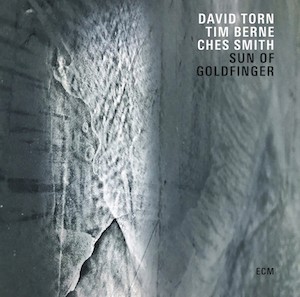 David Torn and Tim Berne have a relationship that reaches back to the 1990s, Torn having produced several efforts by the saxophonist, often adding a harsh bite to his electronics-oriented ensembles. But this project has been gestating since 2010: With drummer Ches Smith, also a member of Berne’s group Snakeoil, the trio has played extensively in the States and Europe.

Sun Of Goldfinger contains two collective improvisations and a single composed piece, all heavily reshaped after the fact by Torn, whose mastery of the studio easily is the equal of his guitar wizardry. At the 12-minute mark of the initially soft and beautiful “Eye Meddle,” Smith launches a thunderous beat out; processed so it sounds like a trip-hop sample of Led Zeppelin’s John Bonham, it ushers the piece into an entirely new sonic realm. Berne begins crying in a hoarse and raucous tone, manically repeating a single phrase, as Torn unleashes long bursts of post-noise-rock guitar and loops of deep. He nods to John McLaughlin’s work with Miles Davis, too, borrowing the wasp-trapped-under-glass tone of “Go Ahead John” and quoting a phrase from “Right Off.”

The album’s middle track, “Spartan, Before It Hit,” is its most elaborate, as the ensemble is augmented by a string quartet, two additional guitarists and piano. While the guests appear only briefly, and not simultaneously, they make the most of their moments. When the piano and guitars come crashing in at the nine-minute mark, the sound is positively apocalyptic, wiping away all that’s come before. The strings, by contrast, are relatively sweet, even when Torn, Berne and Smith are scorching the air.