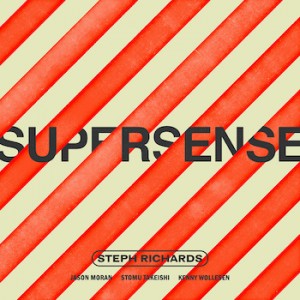 On her third impressive album in as many years, innately adventurous trumpeter Steph Richards continues forging a distinctive path through jazz and experimental music. SUPERSENSE finds her on trumpet and flugelhorn (and “resonating drums/water”), abetted by an ensemble that exercises restraint, freely draws on extended techniques and embraces the bandleader’s aesthetic.

Sagacity is built into Richards’ work, and senses work overtime on SUPERSENSE, courtesy of scent-maker Sean Raspet, who created specific fragrances—both inspired by and responding to the music. (Scratch-and-sniff cards are included with the physical album.) Nine tracks, each with a different character, build the album’s expressive landscape, almost with an abstruse song cycle-like identity. Richards’ slow ascent up a (mostly) major scale ends the otherwise restless energy of the title track, and a simple melodic motif capping off the dreamy “Glass”—hinted at earlier by Jason Moran’s chordal feints—captures the ear and teases a sense of the music’s structure. In keeping with her visceral approach to free play, Richards and company have created an engaging multi-sensory tableau, one that poses the question, Who’s afraid of the avant-garde?