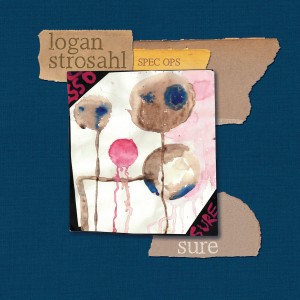 The young Seattle-bred saxophonist and composer Logan Strosahl is a restless polymath, drawing deeply upon 16th and 17th century classical, contemporary music, international folk forms and jazz. His previous recordings have situated improvisation within complex, yet airy, arrangements, where his talents as a composer have taken center stage. But on his first trio outing—made with the nimble rhythm team of bassist Henry Fraser and drummer Allan Mednard—the spotlight falls on his abilities as a winds player. The pieces he wrote for Sure still reflect his multifarious interests: “Chacarera” embraces the rhythm at the heart of the titular Argentine folk style, while “Three” melds together disparate sources, including Baroque recitative, a Turkish rhythm upended by alternating time signatures and an open 5/4 groove that allows his concluding tenor solo to take off into the stratosphere.

Ultimately, his erudite manipulation of such material feels transparent. The trio blows through the compositions with nonchalant agility, using the disparate notions as improvisational grist. The leader’s opener, “Bark,” keeps things simple, providing a spry, yet high-energy, vehicle for alto lines that veer from Ornette-ish bounce to tightly coiled whinnies, while the trio’s sly interpretation of “The Chant” (made famous by Jelly Roll Morton’s Red Hot Peppers) brings out a Coleman-like joy. The group stretches time like taffy on a charged version of Monk’s “Coming On The Hudson,” while a luxuriant reading of “Isfahan” serves as a showcase for the leader’s lyric imagination. Despite his age—he’s just 30—Strosahl presents the program with seasoned confidence, shaping his compositional ideas to produce ravishing results, rather than forcing his conceptual thrust to the forefront.