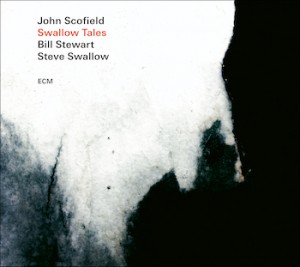 Guitarist John Scofield’s new album reflects on a partnership and musical source that stretches back decades, while his trio performs with the spirit of a new beginning. The title refers to bassist Steve Swallow’s compositions, which serve as the source material here. Some of these tunes originated in the late 1970s, when an upstart Scofield was the bassist’s protege. Time has served these pieces exceptionally well, and so does the group’s energy throughout Swallow Tales. That spirit comes across from the first notes of “She Was Young.” Scofield’s relaxed vibe includes an array of low-key effects that quietly embellish his approach to the melody, while Swallow’s lines become intertwined with all of the guitarist’s turns. Drummer Bill Stewart’s seemingly light touch becomes the ideal complement. Swallow and Scofield also swap leads on “Falling Grace,” both solos sounding more pointed atop Stewart’s roll. Throughout, Scofield’s vibrato remains consistently inventive, especially through his deeply lyrical delivery of the ballad “Hullo Bolinas.”

Swallow Tales is Scofield’s debut leader date on ECM, and he makes the most of the label’s undefinable airy sound on the lyrical “Away.” As he lays back, he knows that this kind of tribute is as much about highlighting great tunes as it is about their interpreters.