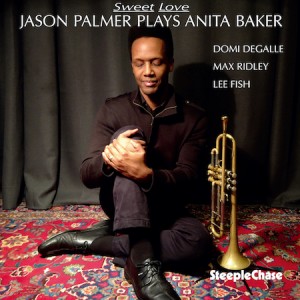 Sweet Love: Jason Palmer Plays Anita Baker is the final installment in a trio of albums trumpeter Palmer has recorded during the past seven years on which he’s paid tribute to great female soul and r&b singers. The first was a 2012 nod to Minnie Riperton, which was followed in 2015 by his bow to Janelle Monáe.

If you’re a fan of the Baker songbook, then this record—which includes classics like “Sweet Love,” “Giving You The Best That I Got” and “Body And Soul” (no, not the jazz standard)—will hit the right pleasure nodes. But even if you aren’t too familiar with her oeuvre, the album still is worth seeking out. Palmer and his group are dutiful in the best sense of the word—they respect the source, but make each track their own. The trumpeter is also accompanied by an ace rhythm section: pianist Domi Degalle, bassist Max Ridley and dexterous young drummer Lee Fish, whose funky rhythms bring to mind a New Orleans snare player. For the most part, this is a joyful album that reminds you of something the late Roy Hargrove might have put out 10 years ago—Earfood, for example. But to paraphrase an Anita Baker tune, the album will bring you joy.