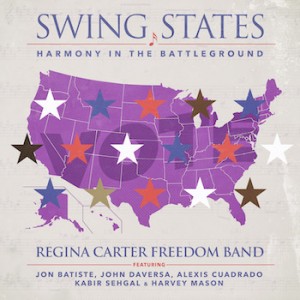 The music never approaches the acerbic tone of the Black Lives Matter protests that followed George Floyd’s killing or the maudlin tenor surrounding the inescapable COVID-19 pandemic—two events that almost certainly will impact the decisions of voters. Instead, Carter delivers ingenious covers of idiomatic tunes associated with U.S. swing states—places that could decide the country’s next political epoch.

Carter opens the album with a spoken-word recollection of growing up in Detroit and how observing cultural differences works toward shaping how individuals vote. She also mentions watching her older family members head to the polls—a pertinent recollection given recent reports of voter suppression efforts and the centennial anniversary of the 19th Amendment, which worked to give women in the U.S. the right to vote. Other band members—pianist Jon Batiste, trumpeter John Daversa and drummer Harvey Mason—provide their own personal mementos of Louisiana, Florida and Kansas.

The overarching theme of unity is channeled through masterful makeovers of chestnuts, like the rambunctious reading of “On Wisconsin!” and a blues-honed take of “You Are My Sunshine (Louisiana).” The high point, though, is the dramatic rendition of “Dancing In The Streets.” Instead of the tune being driven with its signature jack-hammering rhythm, Carter recasts it as an elegiac ballad, the bandleader and Daversa elongating the melody across the rhythm section’s lumbering tempo. Her violin then rises with luminous yet oblique improvisation, a feat illustrating her keen musicality and interpretive prowess.

Even though guarded optimism permeates Carter’s latest effort, solemnity sneaks through in spots, articulating the gravity of what Americans are set to face in coming months.