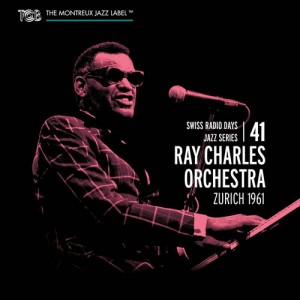 Ray Charles was on the verge of international stardom when he and his big band played this concert in Zurich, Switzerland, their first stop on a fall 1961 European tour that included a well-documented and acclaimed series of concerts in France. Fresh on the heels of the release of his now iconic album Genius + Soul = Jazz (Impulse!), Charles, then 31, is true to classic form in this context, his vocals and piano oozing with blues, soul and gospel. Balancing out the jazz end of the equation is Charles’ orchestra, which swings with authority, charges headlong into uptempo numbers and features several outstanding improvisers of the day, among them alto saxophonist Hank Crawford, tenor saxophonist/flutist David “Fathead” Newman, tenor saxophonist Don Wilkerson, trumpeter Marcus Belgrave and drummer Bruno Carr. The program is well-paced, with a smart song selection that includes material from Charles’ Atlantic years (“I Believe To My Soul,” “Come Rain Or Come Shine,”), tunes from his recent ABC recordings (“Georgia On My Mind,” “Sticks And Stones,” “My Baby,” “Margie,” “I Wonder,” “Hit The Road Jack”) and instrumentals arranged by Quincy Jones (“Happy Faces,” “Along Came Betty,” “The Birth Of A Band,” “I Remember Clifford,” “Ray Minor Ray”). Completing the virtual picture of perfection are the obligatory Raelettes, their well-rehearsed four-part choir infusing tunes like “Hit The Road Jack” and “I Wonder” with tight harmonies, sacred-to-profane sentiment and just the right amount of theatric drama. This was the template for an ingenious formula that clearly bore Charles’ stamp and would make him world-famous for decades to come. Listening to Zurich 1961 is like getting a sneak-peak into Brother Ray’s imminent stardom. The live recording quality is decent-to-good, leaving something to be desired balance-wise when compared with Charles’ studio albums from this important era. But inspired performances by the leader, his go-for-the-throat band and the delightful Raelettes more than make up for this technical flaw.