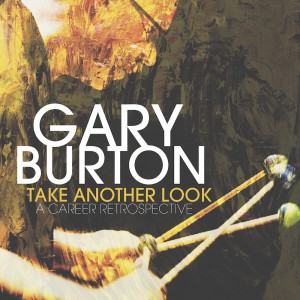 Who else could make a song with the name “Liturgy” sound so inviting?

If you’re an unrepentant Gary Burton obsessive, hearing how he swings in various settings during six decades alone is worth the time spent here. Across the five LPs of Take Another Look: A Career Retrospective, the now-retired vibraphonist and educator accompanies his various ensembles through hippified electric settings, some acoustic work and occasional ventures into Appalachian-derived music.

Welcome and familiar tunes from Burton’s late-’60s groups crop up early, “General Mojo’s Well Laid Plan,” “Country Roads” and “Boston Marathon” making the case for his band being well-suited to thrill fans of The Grateful Dead. A few Latin-tinged numbers are interspersed (“Como En Vietnam” gets a bit free on disc two of the set), and the fiddle’s in no short supply, either. The set’s third LP finds Burton embracing an ECM aesthetic on his sides for the label, and on the next album, GRP Records come to bear.

Burton also should be credited with offering guitarists an inviting forum in which to work, much in the same way Chico Hamilton envisioned his own ensembles (both leaders recorded with Larry Coryell early on in his career). Players as dissimilar as Wolfgang Muthspiel, Pat Metheny, John Scofield and Julian Lage all crop up in Burton’s orbit on Take Another Look, and mark the vibraphonist’s growth and development.

As an art object, the toothsome, marbleized design of the LP sleeves and sturdy packaging makes the Mack Avenue collection (which includes only a single previously unreleased track) an engaging stroll through Burton’s important—and sometimes underappreciated—career.