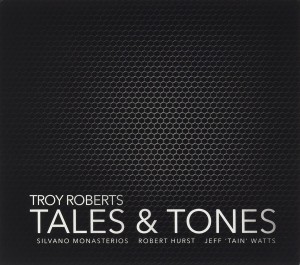 What a difference a bass player makes.

Troy Roberts’ last album, 2015’s Secret Rhymes, made an impressive case for the young Australian tenor player, both in terms of his complete mastery of the instrument and his prowess as an improviser. His rhythmic dynamism, particularly when playing with drummer Jeff “Tain” Watts, was particularly striking. And yet, Tales & Tones manages to make that achievement seem minor by comparison. For starters, Roberts has expanded his purview, doing more of the writing this time around and adding soprano saxophone to his arsenal. He still continues to excel at finding fresh ways into familiar tunes—his “Take The ‘A’ Train” convincingly refreshes one of the most over-roasted chestnuts in jazz—but there’s even more pleasure to be had in hearing him work variations on his own themes, from the modal twists in “Pickapoppy” to the post-modern bebop of “Decoration.”

But the most significant difference with Tales & Tones is that the energy levels are way, way up. Roberts is working with essentially the same band, with Watts again on drums and longtime collaborator Silvano Monasterios on piano, but instead of Chris Smith, this album has Robert Hurst on bass, and it’s hard not to suspect that’s the key.

Anyone who recalls Hurst’s work with Watts in Branford Marsalis’ band will have no trouble recognizing the chemistry here, and the way it energizes Roberts, from the funky swagger of “Trams” or the offhand virtuosity burning beneath the rhythmic games of “Boozy Bluesy.”