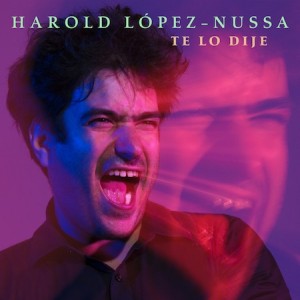 Te Lo Dije is used throughout Cuba to mean, “I told you so.” True to the defiant spirit of the phrase, Havana-based pianist Harold López-Nussa’s new album explodes and expands contemporary narratives around modern jazz, ingeniously incorporating myriad Afro-Cuban styles.

The album opens with “Habana Sin Sábanas,” a high-octane track that combines the intricacies of an uptempo Latin vamp, salsa-style trumpet and a complex piano montuno with a syncopated bebop-like head and harmonic structure. The latter stylistic qualities might be assumed to be outside of the Afro-Cuban tradition, but on many of the songs here, López-Nussa deftly closes these supposed gaps imposed by the silo of genre.

In fact, on the closer, “Van Van Meets New Orleans,” López-Nussa specifically signifies where songo—a term coined by the beloved Cuban band Los Van Van—meets New Orleans. By drawing the comparison, López-Nussa elucidates the Cuban roots that helped make jazz what it is. And the bandleader again draws the parallel on “Timbeando (To Chick Corea),” a tribute to the iconic composer’s Elektric Band.

Te Lo Dije is rip-roaring fun, often flying by at a breathless clip. It’s also astonishingly fresh. Though firmly seated in the rhythmic syncopation and interwoven melodies Latin music is known for, the recording is catapulted into new realms with López-Nussa’s fearless sense of stylistic combinations.