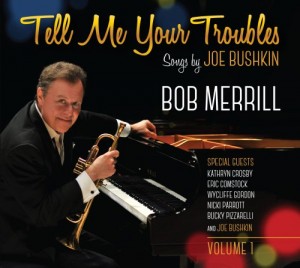 Pianist Joe Bushkin, who died in 2004 just shy of his 88th birthday, was a musician for whom success meant making other artists sound their best. A composer of sturdy melodies and bright, uplifting choruses, the longtime Benny Goodman Orchestra member wrote songs for the film and stage that had a peculiar knack for launching careers and making names. (One example: His song “Oh! Look At Me Now,” as recorded by the Tommy Dorsey Orchestra in 1941, would become the first official hit for a young vocalist named Francis Albert Sinatra.) Trumpeter Bob Merrill, who apprenticed with Bushkin toward the end of the pianist’s life, honors the elder composer’s subtle but substantial legacy on Tell Me Your Troubles, an homage crafted with heartfelt reverence and respect. Aside from his own expressive trumpet playing and singing, Merrill has enlisted a roster of talented contemporaries to provide wattage to the filaments of Bushkin’s work. Vocalist Kathryn Crosby—Bing’s second wife—provides graceful vocals on “Hot Time In The Town Of Berlin,” while guitarist Bucky Pizzarelli and trombonist Wycliffe Gordon trade jabs on “Boogie Woogie Blue Plate” and “Goin’ Back To Storyville.” And courtesy of an archived recording, Bushkin himself appears on piano on “Oh! Look At Me Now.” It’s one of many enlightening throwbacks on this nostalgic disc. Elsewhere, speeches and testimonies, including one by Sinatra himself, provide additional insight into a musician—and human being—of great warmth and quick wit. (An anecdote by comedian Red Buttons tells of a time Bing Crosby offered Bushkin a sleeping pill suppository. Bushkin’s response: “Bing, I was up all night, but my ass fell asleep!”) Endearing as those anecdotes are, it’s the compositions—and Merrill’s fidelity to them—that serve as the most enduring memorials to Bushkin’s wistful genius.