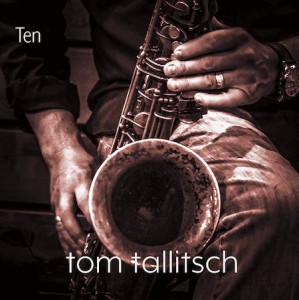 Though often associated with a classic hard-bop sound, New Jersey-based saxophonist Tom Tallitsch changes things up a bit on Ten. After a stint with Posi-Tone, the album is Tallitsch’s second self-released outing and 10th overall, and for the occasion, he assembled a band of Philadelphia musicians for a restless collection of originals that ventures into soul-jazz and rock.

Given that the bandleader’s previous output has found him exploring the music of David Bowie, Neil Young and Led Zeppelin, the genre-spanning nature of Ten shouldn’t be a surprise. Still, it manages to provide the unexpected. With guitarist Mike Kennedy’s echo-laden tone jostling for space with Tallitsch’s warm, winding ventures, album-opener “Traveler” functions as something of a statement of purpose, as the two forces rewardingly challenge one another. As Tallitsch’s soprano weaves though a contemplative melody, Kennedy keeps nudging the throttle open with a backdrop that alternately chimes and growls. At 10 minutes, “Pine” marks the record’s longest venture led by Tallitsch’s twisting tenor and Kennedy, whose sound recalls the big-sky amble of Bill Frisell. But the funk-shaded “Lemmings” leaves the record’s strongest impression with a compact, head-bobbing hook that makes way for a deft exchange between guitar and saxophone atop percolating drummer Dan Monaghan and bassist Jason Fraticelli.

The back half of the record downshifts with the bluesy “Orange, Yellow and Red,” and finds Tallitsch moving into less settled waters for “North Shore,” which carries a steady pulse from Monaghan that sets aside some of the record’s tension for a breezier pace. Still, as celebratory effort, Ten intimates that there’s still much more to explore in the future.