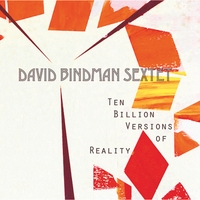 Brooklyn-based tenor/soprano saxophonist and composer David Bindman, who co-led the Brooklyn Saxophone Quartet with the late Fred Ho, wrote this suite of chamber-like pieces during two separate stays in the mountains near upstate Cambridge, New York. The remarkable geography of the region has the power to inspire the human spirit and induce deep thought and reflection, something clearly reflected in the music on Ten Billion Versions Of Reality. Bindman seeks to create works that offer artistic alternatives to the greed and materialism that pollute people’s lives and go against the natural world, and with this new release, he hits the spiritual jackpot. Bindman, trumpeter/flugelhornist Frank London, trombonist Reut Regev, pianist Art Hirahara, bassist Wes Brown and drummer Royal Hartigan—the same musicians who recorded the sextet’s self-produced 2012 debut, Sunset Park Polyphony—execute this winding stream of seven compositions with sensitivity, purpose and an exploratory mindset. Bindman’s melodies are complex yet accessible, thanks to the patient pacing, restraint and deliberateness demonstrated by his team. Time is virtually unbound. Sometimes the musicians lock into meter together, seemingly by spontaneous consensus, as when a solid groove kicks in on the opener, “Sketch In 12.” Other times they venture out or simply drift off on their own into separate yet concurrent rhythmic streams, like on the heavily improvised deep-water sections of the title track. Such diverse and disparate musical elements contribute to a profound sonic geometry, a big picture of sorts built on multiple conversations and varying perspectives.