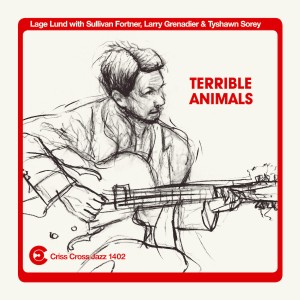 There’s a sense of heedless exploration that opens guitarist Lage Lund’s Terrible Animals, but the bulk of the album moderates the initial avant-excursions.

Opener “Hard Eights” rattles with an moody melody and some light effects listeners might not be expecting from the bandleader. The rabble subsides a bit as pianist Sullivan Fortner ambles through a solo, kicking up odd rhythms and an unpredictable cascade of notes. Control of the tune’s ceded back to Lund, before the next tune, “Aquanaut,” conjures some fusion-adjacent vibes.

What follows is a noticeable shift away from the genre-fluidity that defines Terrible Animals’ opening tracks: “Haitian Ballad” mostly is restraint and beauty, flecked with moments of abandon; “Ray Ray” finds Fortner swinging pretty hard; and “Take It Easy” excels on the back of Lund’s light guitar trickery.

“Octoberry” and the title track rank as exceptions, making use of clipped guitar notes and otherworldly buzzing. There’s really not a slack moment across the 10-tune offering. And that’s in part because of Lund’s compatriots: Fortner, bassist Larry Grenadier and drummer Tyshawn Sorey. But maybe the introductory whiff of the avant-garde simply was Lund exploring a singular facet of his musical personality, before serving up a bevy of less experimental work. Whatever the reason, bits and pieces of Terrible Animals sound like an irresistible and raucous foray into the beyond.