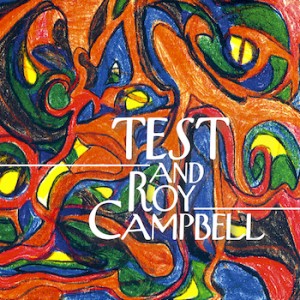 Multi-instrumentalist Daniel Carter and TEST slot into a space where gut-bucket improv and jazz meet, a place that, despite its remove, worked to invigorate rock-related acts interested in exploring something beyond what most expect from guitar, bass and drums.

It’s in part because of that alcove of sound, that Carter found himself performing with the quartet and trumpeter Roy Campbell at Hint House on April 16, 1999. The New York loft—rented by the rotating cast of the noisenik, rock-adjacent No Neck Blues Band (its bassist doubling in TEST’s lineup)—served as a clubhouse and laboratory where alchemy must have been achieved at least a few times at countless shows. And on TEST And Roy Campbell, the exploratory spirit of that time and place plays out during a single 47-minute live track.

So many things were different then: It was pre-9/11, musicians could hock albums and get over (to an extent) and a label system that ostensibly would collapse a few years later still was able to serve admittedly small segments of the listening population. That TEST issued work through AUM Fidelity, as well as Thurston Moore’s Ecstatic Peace! imprint speaks to a landscape that truly seems foreign at this point.

The band hedges toward the chatty side for free-music; Carter (on reeds, trumpet and flute), Campbell and reedist Sabir Mateen don’t lavish listeners with longtones or meditative waves of sound. This is work of a collective accelerated heartbeat, the frontline uncorking diabolic screeds—frequently simultaneously, overlapping in pungent wailing. But there’s a beautiful democracy to it, all involved sensing just the right moment to give a compatriot more space and time, when to step back and listen.

The sonics of the recording itself might not be on par with the performance here, but if this album’s meant to render in-the-moment creativity in corporeal form, it’s done its duty and enriched recorded history.