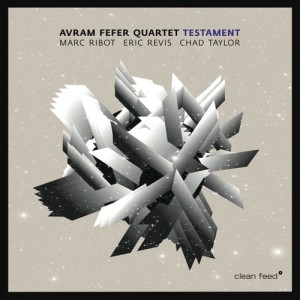 Saxophonist Avram Fefer has developed a rapport that’s held for about a decade with the tandem of bassist Eric Revis and drummer Chad Taylor. The relationship has been flexible enough to endure some downtime; the trio’s last album was released in 2011. But Testament revels in new and nuanced textures as the trio reconvenes, adding Marc Ribot.

The guitarist’s talents—spread across genres during the past 35-plus years through his work with Diana Krall, Solomon Burke, Elvis Costello, Marianne Faithful and Tom Waits—push the band toward the edges, prompted by a tone that shifts from jazz-world comping to blues shredding. It’s also a feature of the album that might help pull some more listeners with traditionally tuned ears into Fefer’s orbit.

“Essaouira,” presumably named for the Moroccan port city, mimics the tide, rolling in on waves of Taylor’s drumming as Fefer and Ribot mirror each other on the melody. The tune, penned by the bandleader, first appeared on Eliyahu, a collective 2011 work by the trio. With Ribot’s addition, though, the song takes on a new life, as does Taylor’s “Song For Dyani,” another cut from that earlier album.

“Magic Mountain” and “Wishful Thinking” incorporate heavy doses of Ribot’s spirited six-stringing, but the bandleader’s writing and playing still shine through, touching on the calmest moments of contemplation and moving into the most pressurized distillations of passion. That the saxophonist does so in a holistic fashion across Testament makes it a hothouse of a recording, one that clearly benefits from Fefer’s time in Burnt Sugar The Arkestra Chamber and Adam Rudolph’s Go: Organic Orchestra.