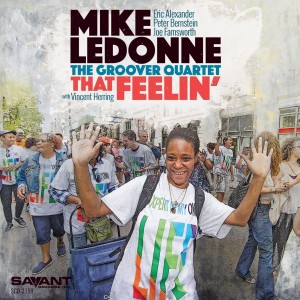 Like those old married couples who nish each other’s sentences, Mike LeDonne and his bandmates know each other so well that they have an appropriate response for every musical idea. But what makes for boring dinner conversation becomes scintillating musical interplay on That Feelin’, thanks to skilled arranger, bandleader and keyboardist LeDonne.

The album’s cover photo was taken at the 2016 Disability Pride Parade in New York, a cause near to the heart of LeDonne, who has a disabled daughter.

Indeed, his love for his daughter may inform almost every aspect of this project. There’s the tender sentiments expressed through covers of The Delfonics’ 1968 Philly soul hit “La La (Means I Love You),” a rousing reading of trumpeter Donald Byrd’s “Fly Little Bird Fly” and a cosmic takeoff on Lee Adams and Charles Strouse’s Bye Bye Birdie production number “A Lot of Livin’ To Do.”

LeDonne produces a booming organ sound reminiscent of earlier B-3 king Jimmy Smith. And as always on That Feelin’, the Groover is at the heart.