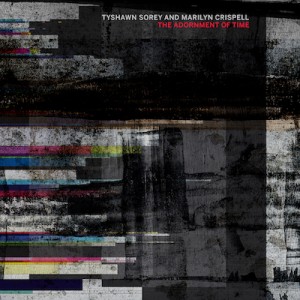 The bifurcation of jazz and its associated musics—or at least the listenership of the two branches—has been hugely beneficial in one respect: Any perceived limitations to form and function are discarded by one set of folks and stringently adhered to by another, enabling both the inside and outside wing to retain its heroes.

The downside, though, is that folks like pianist Marilyn Crispell, despite working with a wondrous list of well-known performers for decades and releasing music through ECM, remains a relatively unsung purveyor of “out” sounds. During the past year, though, in addition to issuing her umpteenth album on Leo, Dream Libretto, the pianist also was an integral part of Joe Lovano’s Trio Tapestry. Linking up here with drummer Tyshawn Sorey, another improvisor who perhaps warrants wider acclaim, Crispell is capping an intensely creative period in her career. Or, at least, another one.

The Adornment Of Time, a single 64-minute track, sports at least six sections, ranging from its twinkling-chimes opening to the few stentorian segments where Sorey and Crispell rail against the expected.

Crispell might coax out some dissonant chords as Sorey tucks into a regular rhythm before both engage in extended silence. Tinkering with the inside of her piano functions as a sonic detour, as do her painterly washes of tremolo or augmented chording. Then there’s the excitement of Sorey’s thudding exclamations—or moments of tender restraint. And while The Adornment Of Time isn’t likely to change the minds of listeners who think the genre ostensibly stopped evolving in 1959 (or 1961, if you want to use Coltrane’s Live At The Village Vanguard as the point when everything started to break apart very publicly), it’s as vital a recording to the music’s longtail history as the Branford Marsalis Quartet’s most recent effort. And just as enjoyable, if you have the right set of ears.