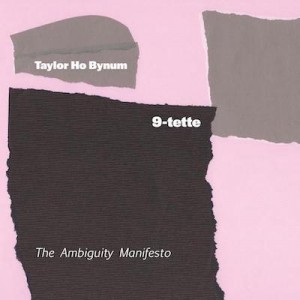 As a bandleader and composer, cornetist Taylor Ho Bynum strives to create elastic, variable vehicles for improvisational interplay. The influence of mentors like Anthony Braxton and Bill Dixon always has been apparent in those endeavors. The Ambiguity Manifesto not only finds Bynum forcefully emerging from their shadows, but it stands as the most striking accomplishment of his career.

The front half of this long-form suite includes three compositions constructed as modular platforms, bracing in their clarity and directness, and generous in the adaptability yielded to the players. Bynum underlines that versatility during the album’s second half, deconstructing those same pieces into new shapes, where even familiar motifs sound new in a shifting context.

The riveting opener, “Neither When Nor Where,” begins with a sly funk backbeat and a needling guitar riff from Mary Halvorson that summons the feel of the indelible Julius Hemphill tune “Dogon A.D.,” with cellist Tomeka Reid comping splintery arco accents à la Abdul Wadud. Alto saxophonist Jim Hobbs and bass trombonist Bill Lowe layer lilting and earthy solos over the groove, with constant commentary from the rest of the band.

Much of the album refracts different bits of pieces early in the program, emphasizing various subgroups within the band. And it’s here that the excellent ensemble gets to really dig in, revealing a remarkable level of interaction and intuition. The oxymoronic album title embraces uncertainty as an operating principle, but there’s nothing indecisive about what the band brings to the material.