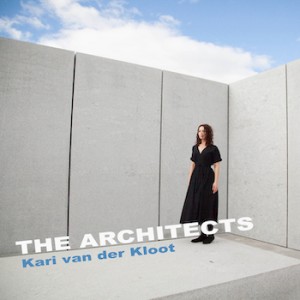 Kari van der Kloot’s admiration for Canadian musicians like Leonard Cohen and Joni Mitchell isn’t a secret. Despite the singer having lived in New York since before the release of her debut album in 2016, such appreciation is understandable, given her vocation and Canadian heritage. Still, van der Kloot’s latest, The Architects, takes a more nuanced approach to blending spoken and sonic art.

On “It May Not Always Be So,” there’s an overall lightness; many of the album’s compositions echo the straightforward tonal qualities of iconic Mitchell records like Court And Spark or Blue. The Architects, however, isn’t entirely devoid of embellishment. Opener “What I’ll Find” contains a spirited solo from Lisanne Tremblay, whose violin plays with reverb, contrasting with van der Kloot’s drier vocals. “Same Song” is the most dramatic of the 10 compositions here—and not just for its unexpected inclusion of Minimoog synthesizer. An illusory vocal sound is achieved through heavy delay and unison violin movement without leaning too heavily on effects. The Architects’ tonal honesty is refreshing. And it’s not just for channeling past musical character, but because van der Kloot’s voice and precise execution exude beauty without relying on excess.