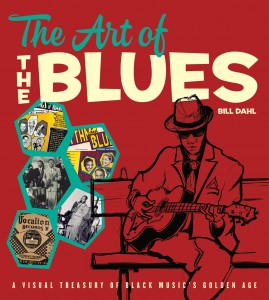 Acclaimed author and music journalist Bill Dahl, who has written liner notes for dozens of albums, teamed up with art consultant/musician/historian Chris James to assemble the 224–page book The Art of the Blues: A Visual Treasury of Black Music’s Golden Age. The book is illustrated with 350 images that chronicle the history of the blues via photographs, sheet music, album covers, 78 r.p.m. labels, advertisements, ticket stubs, concert posters and movie posters. A few of these images are famous—such as the iconic portrait of Bessie Smith with both arms extended (taken by the New York–based photographer known as Elcha) or the LP cover for 1960’s Muddy Waters At Newport—but many others document ephemera. The book provides a fascinating visual documentation of the music industry as well as insight into American culture. For example, the cover of the 1936 sheet music for “Saddle Your Blues To A Wild Mustang” (lyrics by George Whiting and Buddy Bernier; music by Billy Haid) features an illustration of a cowboy wearing spurs, sitting on a fence and playing guitar while looking at a nearby bucking mustang. The cover design also has a rectangular slot for a photo of a musician who had recorded “Saddle Your Blues.” The version of this sheet music in Dahl’s book depicts African American bandleader and pianist Claude Hopkins—who enjoyed residencies at the Savoy and Roseland Ballrooms—but other versions included a photo of a white musician. (I did a quick Google search and found versions that have photos of Henry Hall or Phil Levant on the cover.) Visual treasures abound here: What a delight it is to see sheet music for “Spinnin’ The Web,” composed by drummer Chick Webb and vocalist Ella Fitzgerald, both of whom are depicted in blue–tinted photos. Elsewhere, there’s a 1929 newspaper advertisement for Louis Armstrong’s record “Tight Like This,” illustrated with a photo of a tuxedo–clad Satchmo, with text hailing him as “the country’s greatest trumpet player.” It’s difficult to quickly flip through this beautiful book because there are so many compelling images that deserve a closer look, whether it’s a publicity portrait of a young Etta James (taken by Hollywood photographer John E. Reed) or the 78 r.p.m. label of “Adam Bit The Apple,” recorded by Big Joe Turner for Houston’s Freedom Recording Co., which used the Statue of Liberty as part of its graphics.