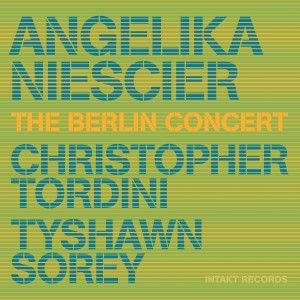 Saxophonist Angelika Niescier helms a trio bursting with possibilities on The Berlin Concert, a recording that extends her artistic vision. This set from the 2017 Berlin Jazz Festival features a pared-down version of the band featured on Niescier’s previous opus, 2016’s NYC Five (Intakt). Joining her here are bassist Christopher Tordini and drummer Tyshawn Sorey, two pillars of the New York scene.

The four original compositions actually are simple melodic lines that serve as springboards for improvisation. The set here opens with “Kundry,” a burner that shines a proper light on each of its protagonists. Niescier uses the full range of her instrument and gets quite passionate, almost reaching a breaking point on occasions. Instead of keeping time, Tordini plays variations on the melody or just states it, while Sorey demonstrates once again why he is one of the genre’s most in-demand drummers. His mastery of dynamics does marvels, propelling Niescier forward, without drowning her out. The Berlin Concert closes with “The Surge,” inserting a sense of urgency and taking the band into a free mode of performance. Niescier lets loose, and Sorey is in an explosive mode. Miles away from his solid conceptual and abstract work, it is a delight to hear him at his most visceral.