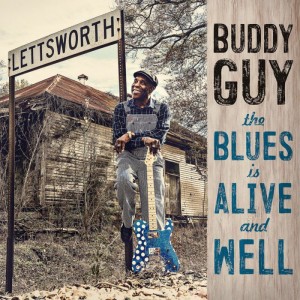 In many ways, the Buddy Guy of 2018 is the same dynamic fellow who delivered a stunning, eye-popping performance in the rock documentary Festival Express, filmed in 1970. For a staggering 60 years, Guy has been dazzling fans with a potent style of blues that includes nods to both B.B. King and Jimi Hendrix. Decades ago, Guy’s grit, chops and authenticity inspired many British Invasion rock musicians, including Jeff Beck, Mick Jagger and Keith Richards—all of whom show up as guests on this remarkable new album.

Aptly titled The Blues Is Alive And Well, this disc is no reinvention of the wheel, but producer/songwriter/drummer Tom Hambridge keeps things lively. With Hambridge’s assistance, Guy delivers what one would expect from an 81-year-old elder statesman (albeit one who performs like someone half his age). This album is filled with Guy’s trademark, stinging electric guitar solos—each packing enough power to peel paint off a house. Guy’s guitar heroics attract so much attention that his vocal prowess has long been underrated, and his voice remains in superb shape, a supple instrument with impressive range. Neither Jagger (harmonica) nor Richards (electric guitar) contributes vocals on their respective guest tracks, but when the lead singer in question is Guy, there’s no need to get in the way of the boss. Guy trades vocal lines with James Bay on the slow-burning “Blue No More,” and the young British singer and guitarist comports himself quite well. One track that certainly will have classic rock fans buzzing is “Cognac,” which name-checks Muddy Waters and finds Guy, Richards and Beck all injecting nasty guitar licks on this ode to brandy and blues. The album concludes with a naughty, 56-second lesson on animal husbandry, blues history and double-entendres—“Milking Muther For Ya”—which calls to mind Memphis Minnie’s “Dirty Mother For You.”