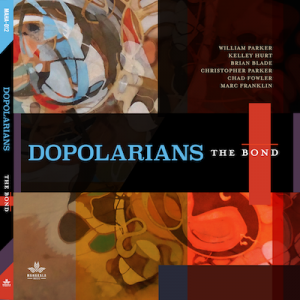 The Dopolarians are essentially the Little Rock, Arkansas-based trio of singer Kelley Hurt, pianist Christopher Parker and alto saxophonist Chad Fowler, who all met while attending college in Memphis in the mid-1990s. They started playing together in 2017 and recorded their first album in 2018 with two storied veterans, saxophonist Kidd Jordan and drummer Alvin Fielder.

Fielder passed away in January 2019, so the band reinvented itself for its latest album, returning to the studio with trumpeter Mark Franklin, drummer Brian Blade and William Parker on bass. For some listeners the first-time pairing of Parker and Blade — the former known for his protean power and improvisational fire, the latter for his remarkably subtle touch and immaculate time — is worth the price of admission. They mesh easily, with Parker opting for a less frenetic attack and Blade melding the cymbal surges of Sunny Murray to the explosiveness of Tony Williams. The three extended pieces on The Bond are measured, ebbing and flowing naturally, with everyone more or less taking turns; there is plenty of collective spontaneity, too. The core Dopolarians acquit themselves, but ultimately this doesn’t feel like the work of a band as much as a free improv session with a heavy spiritual jazz vibe.