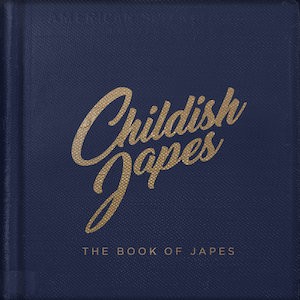 Listening to Childish Japes’ latest album is like being invited to a party and making some new friends who are huddled in a corner: An hour ago you didn’t even know these people’s names, but now you’re eager to learn more about them.

Looking into the band’s recent past, one thing becomes clear: The new album is a departure from its predecessor. In August 2018, the trio of Asher Kurtz (guitar), Jed Lingat (bass) and JP Bouvet (drums) released Salamander, which featured the pop-oriented singer Dave Vives on all the tracks.

The band’s new album, The Book Of Japes, finds the core trio delivering an all-instrumental program alongside Christian Li (keyboards) and David Leon (saxophones, bass clarinet). The sonic territory here is a place where jazz meets art-rock, with lots of improvisation. The tracks feature bolts of aggressive, rewarding dialogue, with members trading solos as if to say, “That’s what you got? OK, here’s what I got.”

The track “9:41” begins like a standard rock tune and then somersaults into a thrashing, skronking maelstrom before descending into a spare meditation and then returning to the melodic head. The longest track, “Testimonies,” starts with a catchy melody line before shifting to another sonic lane that eventually leads to the metaphoric soundtrack of a sci-fi movie where the hero’s spaceship verges on overheating.

For a glimpse at the recording sessions for The Book Of Japes, fans can check out a YouTube clip in Bouvet’s video blog, featuring excerpts from six tracks. The clip hints at a level of chummy camaraderie that is evidenced by the grooves on this intriguing, nine-track album.