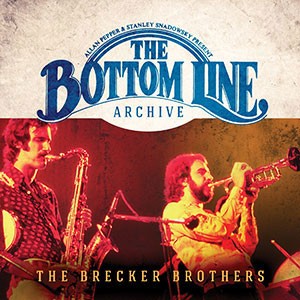 This exciting album, capturing a Brecker Brothers set at New York City’s Bottom Line on March 6, 1976, is an important document for those who feel that fusion ruled. This disc is evidence of the sonic combustion that happened in the mid-’70s when versatile musicians mixed the accessibility of rock arrangements and the deep groove of funk with the harmonic language and improvisation of jazz. The Bottom Line Archive is the only official live release of this lineup of the Brecker Brothers Band: Randy Brecker (trumpet), Michael Brecker (tenor saxophone), Don Grolnick (keyboards), Steve Khan (guitar), Will Lee (bass), Chris Parker (drums) and Sammy Figueroa (percussion). Contributing to three tracks is alto saxophonist David Sanborn, who shows off the chops that would make him a superstar in the ensuing years. As Randy Brecker explains in the album’s liner notes, this band didn’t hit the road very often because its members were too busy working as session musicians in New York City’s recording studios. Many of the musicians in this lineup were close friends who played on each other’s recordings. Grolnick—who plays Fender Rhodes, organ and clavinet during this set—is in the spotlight for a version of his composition “Cactus,” which had appeared on guitarist Joe Beck’s 1975 albumBeck. The band’s set list at The Bottom Line includes three songs from the Brecker Brothers’ self-titled Arista debut, including a rendition of “Rocks” that is spiced with muscular solos from both siblings. Fans of Michael Brecker will want to check out the album’s two versions of his early composition “Night Flight,” and Sanborn fans can soak in the smooth tones of “It Took A Long Time,” which Randy composed as a showcase for the altoist. This album, which is part of a series of concert discs recorded at The Bottom Line, is a funk-fueled time capsule that transports the listener back to the height of the fusion era. (See the April 2015 issue of DownBeat for a recap of a concert tribute to the late Michael Brecker, featuring Randy Brecker. See the May 2015 issue for a Players profile of Sammy Figueroa, and see the November 2014 issue for a Players profile of Steve Khan.)