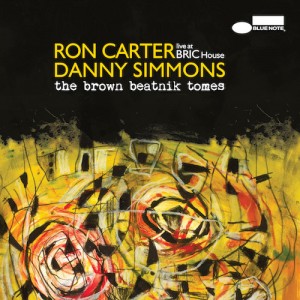 With The Brown Beatnik Tomes: Live At BRIC House, painter and poet Danny Simmons—older brother of Def Jam impresario Russell Simmons and Run DMC’s Rev. Run—imagines in verse a black version of the beatnik scene, something reflective of the African American experience. Even better, he does so live, as Ron Carter’s bass snakes beneath the poetic cadences, grounding the verbal flights in angular jazz and blues.

And for a little more than eight minutes, it actually works like that. “The Jigaboo Waltz” is a cuttingly creative evocation of the role-playing American culture has demanded of black men, and Carter responds to the bitingly sarcastic, sometimes openly angry verse with bass playing right out of the ’60s avant-garde. Elsewhere, though, the concept sputters and stumbles. “For A Pistol,” a tribute to Amiri Baraka, offers only a single metaphor (poet as pistol) over a loping ostinato. And while Liza Jesse Peterson’s declamation against the needless deaths of young black men opens with a good head of steam, the lack of spark between Carter and beatboxer LuQuantumleap ensures that the groove doesn’t match the power of the polemic.

Carter’s trio with pianist Donald Vega and guitarist Russell Malone contributes two tracks, and the bassist offers a lovely, allusive solo on “There Will Never Be Another You.” Between them, though, the cuts don’t amount to five minutes of music, which even on an album as short as this seems miserly.