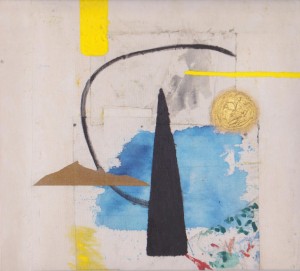 Brooklyn keyboardist Jason Lindner has received increased attention following his contributions to David Bowie’s final album, Blackstar, and currently is making his mark as part of Donny McCaslin’s touring band. In timely fashion, Lindner is pulling the focus back on his own outfit, Now Vs. Now. On The Buffering Cocoon, the group appears in a basic trio format, as Lindner is joined by bassist Panagiotis Andreou and drummer Justin Tyson.

The bandleader combines upright acoustic piano with an array of keyboards, including a Wurlitzer and a pair of Prophet synthesizers, with effects pedals littering their surfaces.

Retro mirage-shimmers overlay all, as Lindner glances over his shoulder at the 1970s and ’80s, picking tonal inflections from multiple decades. But he’s also cosmically attuned to the future, cannibalizing a range of sonic influences.