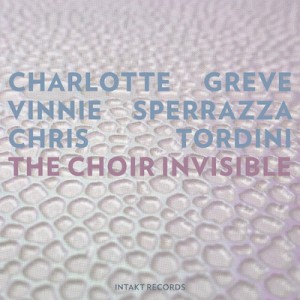 There’s a patience to saxophonist Charlotte Greve’s playing. It’s a quality often found in the most established players, but perhaps supremely notable in a performer who has most of their career ahead of them.

A native of Germany, the bandleader has insinuated herself into the New York jazz scene, perhaps reserving some nervy energy for a more pop-leaning project called Wood River, where Greve, 32, handles vocals set atop what’s ostensibly a jazz-informed rock act. But even that project sits alongside ensemble work with saxophonist Caroline Davis, and Lisbeth Quartett, another group where Greve serves as the main melodic voice.

For The Choir Invisible—an effort that finds the saxophonist joined by drummer Vinnie Sperrazza and bassist Chris Tordini—Greve’s lilting, relaxed approach to her instrument might be the defining feature.

“Change Your Name” comes in slow waves, Greve gently prodded by Sperrazza’s extended technique and Tordini’s arco meanderings. If there’s a genuine criticism of the album, though, it’s that each of the pieces here seem cut from the same cloth: The narcotic swing of “Low,” while instantly engaging, finds itself reprised in a variety of other spots. That might just be persistence of vision, another notable aspect of Greve’s work at a relatively early part of her career. But the whole thing sounds like an easy Sunday morning listen, the trio working to preserve a dynamic that’s indebted equally to upholding tradition and exploring the slow-motion sentiment of the saxophonist.