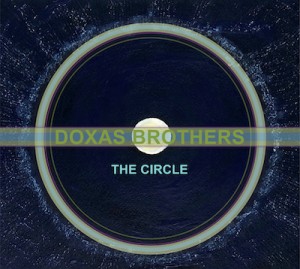 Like most musically gifted siblings, Chet and Jim Doxas share the kind of deep bond that only brothers have. And they further explore that innate chemistry in the company of longtime collaborator and fellow Montréaler Adrian Vedady on bass and veteran pianist Marc Copland.

The band opens on a mellow note with the rhythmically swaying “Uno A La Vez,” which introduces Chet’s searching, keening tenor and Copland’s impressionistic instincts. The peaceful “Temporal” starts with Chet blowing in a more deliberate fashion atop Jim’s gentle brushwork. Vedady offers a melodic moment before Copland brings a spiky dissonance to the proceedings in his solo. As the piece builds toward a tense peak, Chet unleashes considerable chops, overblowing with authority. The strolling “A Word From The Wise” carries an old-school charm, despite Copland’s harmonically provocative comping and soloing. Elsewhere, they collectively push the envelope on “Objets Nécessaires,” summon the spirit of Ornette Coleman on “Joan’s Song” and introduce a touch of New Orleans second line on “Another Soap Box.” A sublime yet subversive note closes the disc with a gentle reading of Gordon Jenkins’ melancholy gem “Goodbye,” where Copland reharmonizes with impunity.