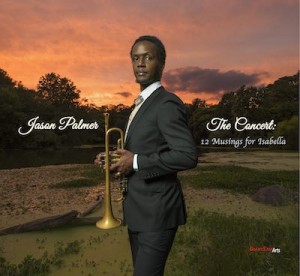 Jason Palmer’s second release with Giant Step Arts, The Concert: 12 Musings For Isabella, was inspired by the 1990 theft of 13 pieces from the Isabella Stewart Gardner Museum in Boston.

Full of long Palmer originals with lots of space for solo improvisation over complex chord changes, the two-disc suite is an excellent vehicle for the bandleader and his sidemen to stretch out and deliver convincing performances. Vibraphonist Joel Ross thrives both as a soloist and chordal accompanist, and drummer Kendrick Scott’s opening solo on “Christ In A Storm On The Lake Of Galilee (Rembrandt)” stands out as a moment of focused individual creativity. Palmer is at his most genuine in moments of musical dialogue—on “The Concert (Vermeer)” with saxophonist Mark Turner and with Scott on “Landscape With An Obelisk (Flinck),” for example.

Despite its presentation as a compelling and adventuresome contemporary jazz performance, the recording falls a bit flat as a concept album. The tunes do seem loosely based on the stolen artwork, but the conceit fits awkwardly with the well-executed, hard-swinging series of challenging original tunes recorded by a successful midcareer artist and a cadre of talented, jazz-famous sidemen. In other words, it’s difficult to hear these musical pieces as a tribute to the stolen artwork that inspired their composition. But there is plenty of thrilling material that won’t be lost on savvy jazz listeners looking for an example of what the highest-profile artists in this genre have to offer.