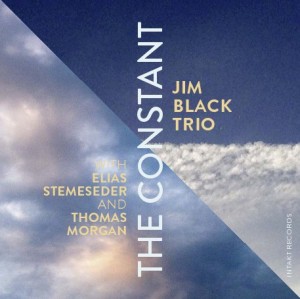 These players maintain an equitable dynamic. Bassist Thomas Morgan’s solos coil nicely around pianist Elias Stemeseder’s declamations, while the leader remains as rhythmically free as ever. Glassy plates of sound slide sideways from the keys, fracturing on top of Morgan’s lyrical bass and Black’s slowly tumbling investigations, setting the album’s scene with a pictorial vividness.

Black’s other tactic is the brisk outside-of-jazz beat-step, adopting traits from rock, funk and electronic music. For “Song H” he sets out at a locomotive pace, as Stemeseder dampens his strings, then releases piano striations, lunging back into percussive key-jolts.

Interchange of roles is important here. “Falls” is another peaceful, impressionistic tune, the tension lying between Black’s elastic patterns and the unusual angles with which the piano phrases approach the beats.

Black introduces his familiar auxiliary percussion on “Chinchilla,” on top of a simultaneously motoring beat. “Medium” breaks down into sparseness, and “Song O” mines for micro-rhythmic gems.

Black likes to combine developing themes within the soundscapes of free improvisation, naturally bonding into a fresh amalgamation. As “Low” settles into the album’s final number, Black uses open space and tiny clusters of sound to impart an improvisatory feel, before fragmented piano melodies emerge.

A dogged pulse arrives around halfway through, before a brief anthem strikes up, lowering into the closing Jerome Kern theme of “Bill,” a ballad from Show Boat that rouses towards an emotive conclusion.