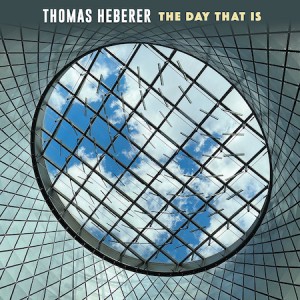 Trumpeter Thomas Heberer’s associations with the ICP Orchestra and the Nu Band bespeak an affinity for democratic institutions, so it’s particularly ironic that the German-born, New York-based musician recorded The Day That Is on Jan. 6, 2021. This album does not wear politics on its sleeve, but the well-oiled mechanics of its compositions, the ensemble’s collegial interplay and the music’s inclusive aesthetics provide argument aplenty to not let a moment be defined by its worst aspects.

Heberer built the band in stages, working the rhythm section for a while before settling on fellow German ex-pat Ingrid Laubrock as its second horn. And while the group existed before the pandemic, he spent much of the time after the virus cleared his performance schedule developing a varied set of compositions for them to play. The title tune is so festive, and the leader’s growling solo so playful, that you might not notice the music’s complexity. “Seconds First” opens as a somber and hushed, but then splinters into a bristling free passage. And “Caro Pook” uses intricate, non-repeating unison figures as launching pads for swaggering forays by drummer Michael Sarin.

One suspects that another thing that Heberer did with his time off was tend to his chops. He negotiates the high pitches with unerring accuracy and fluid grace, and applies his circular breathing so discretely that you won’t even notice how long his lines are, just how right they sound. John Hébert and Michael Sarin have a great, yin-yang partnership. The Day That Is goes a long distance towards redeeming the day on which it was made.

The Day That Is: The Day That Is; Erg Chebbi; Seconds First; Caro Pook; Then There Were Three; The Sleeping Bag Unfolds; Closing The Gap; Jimi Metag; One For Roy; Mapping The Distance; The Sky Above. (43:08)
Personnel: Thomas Heberer, trumpet; Ingrid Laubrock, soprano and tenor saxophones; John Hébert, bass; Michael Sarin, drums.
Ordering Info: sunnysiderecords.com