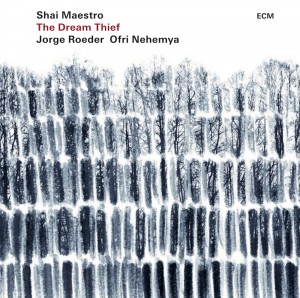 The Israel-born, Brooklyn-based pianist Shai Maestro forged his reputation in bassist Avishai Cohen’s band between 2006 and 2011. His first ECM release as a leader finds Maestro with partners bassist Jorge Roeder and drummer Ofri Nehemya, but includes several stretches of solo piano. Most of the compositions here are the bandleader’s, but the album opens with “My Second Childhood,” by the Israeli singer-songwriter Matti Caspi. There are strong Middle Eastern ballad inflections to this solo piano interpretation, an introspective flow, with grand gestures and intimate decorations. It’s romantic, in an old-fashioned way.

The trio is complete for “The Forgotten Village,” with Roeder’s measured tread and drummer Nehemya’s fidgety details. There’s a similarity to labelmate Tord Gustavsen’s spiritual aura, but not as profoundly articulated. By the third track, there’s a feeling that the pace and tone aren’t going to vary much, but the title cut abruptly accelerates halfway through, agitating the restrained drama. The strongest piece, “New River, New Water,” offers closely entwined piano and bass, percussion dancing around them, Maestro’s right hand stuttering and scampering as he shouts out encouragement. Following this surge, there’s a solo rumination on the standard “These Foolish Things (Remind Me Of You)” and a closing number, “What Else Needs To Happen (For Ana),” that includes samples of a Barack Obama speech on gun control. After the core of the recording, these two tracks seem like tacked-on afterthoughts, programmed at the end because they didn’t quite fit into the flow.