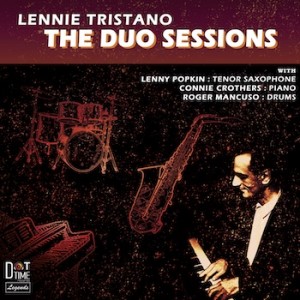 On The Duo Sessions, Lennie Tristano wends his way through the liminal spaces bridging bebop, cool jazz and free-improv. The album’s 16 tracks, recorded after Tristano’s final public appearance in 1968 but never previously released, reveal not only how intuitively the pianist parsed these languages, but how skillfully he crafted improvisational relationships.

Each of the sidemen here—saxophonist Lenny Popkin, pianist Connie Crothers, drummer Roger Mancuso—elicited a different musical response from the master improviser. Thus, the respective duo recordings depart from each other in subtle ways, even as they build on the pillars of Tristano’s precedent-setting arrangements for quintet.

On tunes with Popkin, Tristano disrupts the vertical structures when comping against the tenor player’s discordant solos; his attenuated walking bass lines and pounding chords only allude to harmonic congruity. But his own nimble solos, with their liquid, chromatic runs, would suggest that any seeming incongruity derives from the narrowness of the view, not the vision. With Crothers, Tristano takes on the only four-handed piano composition he ever recorded (“Concerto: Parts 1 And 2”). The pianists’ intense mental rapport verges on the telepathic. The cuts with Mancuso spotlight Tristano’s delightfully inventive contrafacts, built atop the drummer’s sturdy polyrhythms. Tunes like “Palo Alto Street,” a twist on “It’s Alright With Me” and “Home Again,” tickle the imagination and satisfy the mind.