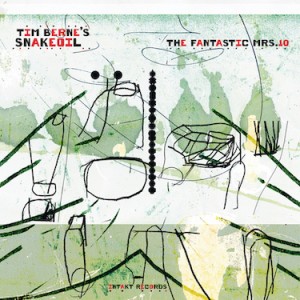 Saxophonist Tim Berne’s band Snakeoil makes its Intakt debut with The Fantastic Mrs. 10 after four albums on ECM, released between 2012 and 2017. On this disc, the ensemble is augmented by the addition of Marc Ducret, a guitarist who’s been one of Berne’s favored collaborators since the late ’80s.

Berne has a highly identifiable musical language, his melody lines here long and meandering as ever. And this version of Snakeoil, like his other troupes, vacillates between biting, skronky free-bop and soundscape-ish ballads that seem to disintegrate as they go. The title piece is almost a suite, moving through definable phases. At first, Berne is alone, murmuring to himself. But when the band comes in, its playing is jagged and staccato, with Ches Smith’s beat thumping and clattering, his kick drum sounding like something from a parade. A later passage pits reedist Oscar Noriega against Ducret, each player snarling and sputtering from a far corner of the sonic field, requiring the leader’s intercession as his solo winds on endlessly. Even at its most unfettered, this music has guiding principles it never abandons.