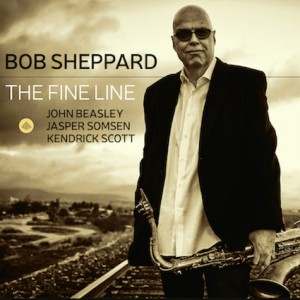 Like a lot of elite, Los Angeles-based studio musicians, reedman Bob Sheppard is one of those players whose sound is more familiar than his name. Even though he’s played on dozens of albums during the past 40 years, ranging from guest spots with the likes of Rod Stewart, Joni Mitchell and Leonard Cohen to sideman gigs with Chick Corea, Freddie Hubbard and Peter Erskine, The Fine Line is only his fourth album as a leader.

Talk about a late bloomer.

Sheppard offers the music here as someone with little to prove, and that casual confidence brings a low-key bravura to the playing. Take the album-opening “Edge Of Trouble”: A driving, modal tune in the vein of McCoy Tyner, it leaves plenty of blowing room, not only for Sheppard’s agile, witty soprano, but also for Simon Moullier’s coolly virtuosic vibraphone and John Beasley’s spryly adventurous piano. But Sheppard and company aren’t content to merely blow changes; they want to make things interesting. So, as the group is easing into the tune, Moullier bends notes and puts chords out of phase, so that his vibes evoke a synthesizer. Later, during Kendrick Scott’s drum solo, Sheppard, Moullier, Beasley and bassist Jasper Somsen play an elaborate contrapuntal pattern that gives Scott extra material to work with. It’s the sort of clever arranging that adds extra dimensions to the music.

That ingenuity pervades the album, ensuring that there’s always a little bit extra for the listener to dig into.

Why play a pop tune like “People Make The World Go ’Round” straight when you can abstract it? Instead of following the form, Sheppard and Beasley use the refrain as a compositional anchor, stretching it through reharmonization, and bending it via variations in tempo and meter. For his reading of “I Didn’t Know What Time It Was,” Sheppard pretends not to know what time the original was in, and plays it as a dark and dreamy jazz waltz.

Featuring innovative arrangements and simpatico playing, The Fine Line is a gem of an album, and another excellent reason to remember Bob Sheppard’s name.