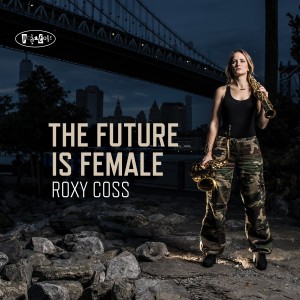 The Future Is Female is all instrumental, but it’s message music through and through. If titles like “#MeToo” and “Nevertheless, She Persisted” don’t send the message, saxophonist Roxy Coss’ performance on her third album should get it across. This is hard-hitting post-bop: aggressive, determined and grim.

But the grimness can overwhelm. Some song titles, like “She Needed A Hero, So That’s What She Became,” suggest uplift; instead comes unrelenting sadness, amplified by Coss’ impassioned soprano solo. “Females Are Strong As Hell” is the record’s fastest and swingingest. But guitarist Alex Wintz and Coss simply bear down and trade burning, yet mirthless, improvs with drum interpolations by an equally flinty Jimmy Macbride. But that’s the point. The Future Is Female is a musical manifesto for the #MeToo movement—no laughing matter. Indeed, the track called “#MeToo” is perhaps the album’s most heartbreaking, Coss’ bass clarinet portraying weariness.

Hope, though, arrives on the last three tracks. “Feminist AF” is no less determined or aggressive than its predecessors, but features an infusion of the blues. “Nasty Women Grab Back” might be described as darkly playful, and on “Ode To A Generation” bass clarinetist Lucas Pino projects cautious optimism.

The Future Is Female is a benchmark in Coss’ burgeoning career; while it’s likely a long-term standout in her discography, few jazz recordings so fully capture their moment.