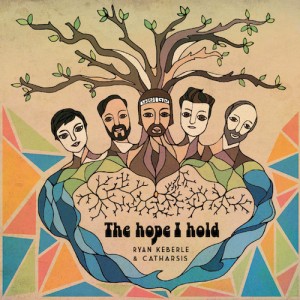 Trombone, guitar and voice are a scarce combo in jazz, which is why this version of Ryan Keberle’s unit, Catharsis, often wanders into interludes of a preeminently striking character. The group formerly included a trumpet, but this time trades sharp brass for the softer, more feathery feel of Scott Robinson’s tenor. Yet, the essential disposition of the group largely is shaped by guitarist/vocalist Camila Meza, whose accompaniments and counterpoints alternately orbit around and melt into the layered harmonic blends.

It might be ironic that Keberle chooses to express a “hope” for America in such uncanny wrapping. Yet this set is also a subtle polemic and protest against Trumpian xenophobia and strongman vulgarity. The cornerstone of its “theme” is a 1935 piece by Langston Hughes, part of which is incorporated into “America Will Be.” Whatever the political message, the words tend to get camouflaged in the rich mix of hovering harmonic clouds. Woody Guthrie would never let his protest get lost in such ambiance. But Keberle’s lyrical precision and Meza’s voice steer through mirror-image crosscurrents and conjunctions on “Despite The Dream,” “Fooled And Pushed Apart” and “Peering.”

While the nine originals here are attentive to pacing, dynamics and timbre, the thematic atmosphere is thin and powdery; they don’t adhere easily in emotional memory. The exception is “Zamba De Lozano,” an evocative Portuguese song sung with overdubs, but still with a plush Brazilian intimacy.