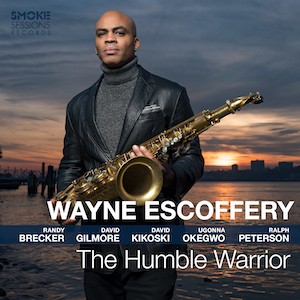 Tenor saxophonist Wayne Escoffery’s music education didn’t begin on the instrument that would earn him a Grammy as part of the Mingus Big Band. It began with the historic Trinity Choir of Men and Boys in New Haven, Connecticut, a stone’s throw from Yale University, where his mother worked. The saxophone came later, in high school, eventually supplanting the voice as his instrument of choice. But Escoffery never forgot the thrilling vocal harmonies of his choir days. His latest album, The Humble Warrior, is replete with them.

Escoffery devotes four of the album’s 10 tracks to a jazz reconfiguration of composer Benjamin Britten’s choral work Missa Brevis In D, which he’d sung as a child. For the “Kyrie” section, the bandleader plays Britten’s vocal motif as a free intro to the sometimes sultry, sometimes tempestuous arrangement for his regular ensemble (pianist David Kikoski, bassist Ugonna Okegwo and drummer Ralph Peterson). But on “Sanctus” and its recapitulation, he spreads Britten’s three parts across a contingent of saxophone, trumpet (Randy Brecker) and guitar (David Gilmore), retaining the exultant circularity of the original, even as the soloists filter its classic lines through a modern-jazz lens. Most delightful of all is the pairing of saxophone and voice in unison on “Benedictus,” a duet between Escoffery and his son Vaughn, age 11—Escoffery’s age when he joined the Trinity choir.

In 2016, Escoffery returned to New Haven as a professor in the jazz department of the esteemed Yale School of Music. (Coincidentally, he now teaches in the same room where he began his saxophone studies.) In teaching about jazz traditions, he became intrigued by an Ed Lewis raw blues tune, “I Be So Glad When The Sun Go Down,” and, inspired, penned what became the album’s opening track, “Chain Gang.” His goal here was to emphasize the connection between work song—the spontaneous expression of the enslaved—and jazz. In this case, Escoffery’s modern composition for quartet invokes the unforgiving frenzy of contemporary life; like all work songs, “Chain Gang” is part commentary and part
coping mechanism.

But it’s on the title track, another original, that Escoffery makes his strongest statement about the musicians whose work galvanized his own career. The “humble warriors” in his life were mentors like saxophonist Jackie McLean and pianists Mulgrew Miller and James Williams, musicians who put artistry and humanity ahead of self-interest. His tribute to them centers on the dynamic between the trumpet and the saxophone; Escoffery uses melting two-part harmonies and commanding, interlocked solos in a persuasive statement about the power of musical synergism. The superb playing of quartet members Kikoski, Okegwo and Peterson—humble warriors in their own right—undergirds the soloists’ clear success in this effort.