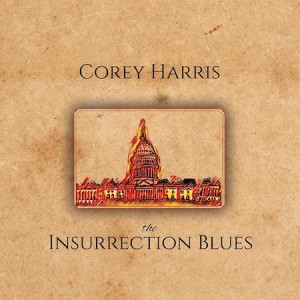 Back in the 1990s, Corey Harris was said to be the future of the blues. These days, whether or not one thinks he fit the lofty bill, the Charlottesville singer-guitarist stays true to his vision of blues tradition. His new album, casual and homey, has him alone in an Italian studio last May.

Its first few tracks are lackluster, coming across as warmups. Harris’ singing voice isn’t particularly strong on treatments of the gospel staple “Twelve Gates To The City” and Delta giant Charley Patton’s “Some Of These Days.” There’s nothing memorable about his guitar version of the West African traditional song “Toubaka,” either. But hang in there — things improve a lot.

Harris has a strikingly personal way with Bentonia blues master Skip James’ “Special Rider Blues,” a sense of rapture surges inside the heart of the classic, and he has a natural feel for the strains of emotion seeping through pantheon guitar stylist Blind Blake’s “You Gonna Quit Me Baby” and “That Will Never Happen No More.” Harris’ musical demeanor can be joyfully distinctive: Savor his instrumentals “Afton Mountain Blues” (with harmonica overdubs by Phil Wiggins) and “Scottsville Breakdown.”

Harris’ moral convictions are of a piece with his music. Several of the songs he chose for revival signify the perseverance of oppressed African Americans. The linchpin giving the album its title, the Saharan-drone original “Insurrection Blues,” stands tall as his forceful response to the Washington D.C. mayhem of early 2021. He wants America to smarten up and get its house in order.