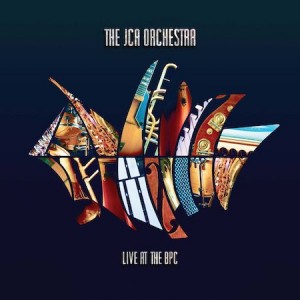 The 11th album by the Boston-based Jazz Composers Alliance Orchestra adheres to a tradition that dates back to 1985: presenting original works by some of the most forward-looking and innovative writers and arrangers of the times. Recorded live at the Berklee Performance Center, the new album is a diverse program of compositions by JCA members David Harris, Darrell Katz, Bob Pilkington and Mimi Rabson, played by a large ensemble that puts a modern twist on traditional big-band instrumentation with the inclusion of strings, French horn and EWI.

Violinist-composer Rabson’s “Romanople” alludes to the disparate historic cultures of Constantinople and Rome, starting with a simple melodic statement (played by violinist Helen Sherrah-Davies) inspired by the Turkish folk tradition that takes flight and lands smack-dab in the middle of a Roman military brass band. Rabson’s other contribution, “Super Eyes–Private Heroes,” is a soundtrack-worthy nod to spy thrillers and superhero flicks, brimming with excitement and suspense. Harris contributes two pieces as well: “The Latest” is rooted in the pentatonic world of traditional Thai music, while “Orange, Yellow, Blue” builds Latin, funk and rock grooves upon a busy, buzzy background of free-improvisation that manages to maintain a sublime sense of coherence and order under the composer’s direction.

On trombonist Pilkington’s “The Sixth Snake,” braininess meets beauty as cool calculation and trial-and-error experimentation result in a warmhearted celebration of dazzling color combinations and complex timbral textures. “A Wallflower In The Amazon,” composed and conducted by JCA cofounder Katz, is an extended interpretation of a poem by Paula Tatarunis (Katz’s late wife), featuring a compelling melodic narration by vocalist Rebecca Shrimpton. The compositions themselves are the stars of this program, brought to life in a live-performance context featuring several remarkably inventive instrumental solos.