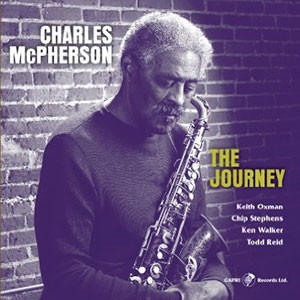 Alto saxophonist Charles McPherson heard his first Charlie Parker recording in 1953, when he was 14. The song—“Tico Tico”—made a lasting impression. “I knew immediately that this is the way you’re supposed to play,” he recalled. In the decades since, McPherson has become one of the stalwarts of bebop saxophone, and Parker’s influence on him has been widely acknowledged. (In 1988, when Clint Eastwood needed a sax player to evoke the sounds of Parker’s horn in the biopic Bird, the director turned to McPherson.) But if previous albums proved why McPherson was qualified to carry Bird’s mantle, his latest, The Journey, proves why he’s now bop’s brightest star. The technical prowess he brings to bop standards like “Au Privave” and “Spring Is Here” is captivating, and the imagination he exhibits on originals like the title track and “Manhattan Nocturne” shows that the 75-year-old isn’t afraid to push at musical boundaries. Joined by a stellar rhythm section of pianist Chip Stephens, bassist Ken Walker and drummer Todd Reid, McPherson graciously shares the spotlight with Denver-based tenorist Keith Oxman. The reedists craft solos with equal poise, trading bluesy passages on Stephens’ original composition “The Decathexis From Youth (For Cole)” and burning through fast-fingered eighth-note licks on McPherson’s “Bud Like.” Each saxophonist even gets his own solo turn, McPherson on a poignant reading of “I Should Care” and Oxman on his bouncy “Tami’s Tune.” With The Journey, McPherson has put out a prodigious album, a fitting summary of his 60-plus year excursion from apprentice to bebop royalty. One listen is all it takes to know that this is the way you’re supposed to play.