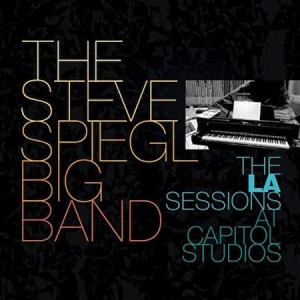 Two decades ago, Steve Spiegl arranged compositions by Bach, Brahms and Scriabin for Enigma, an album by his namesake big band. On his 17-piece ensemble’s new disc, The L.A. Sessions At Capitol Studios, Spiegl dives into the world of opera, crafting instrumental arrangements of works by Handel, Puccini, Verdi and Wagner.

Spiegl rounds out the program with three of his own compositions and an arrangement of Jerome Kern’s “All The Things You Are,” which, as Spiegl points out in the liner notes, is a song that incorporates “a classic chord progression in use since Bach and Handel.” Overall, the result is one of the best big band albums of the year—an ambitious work that has an operatic scope, but without pomposity.

Despite the disparate sources of material, Spiegl sculpted a cohesive 75-minute program; all the arrangements reflect the distinctive sound of his artistic voice. Nothing here feels constrained or academic, partially because Spiegl’s arrangements build in plenty of space for solos. Andy Waddell, in particular, gives the music a modern sheen, whether he is coaxing tender notes from a nylon-string guitar (as on the leader’s “Gardens Of Cordoba”) or shredding on an electric axe (as on “Ave Maria,” from Act 4 of Verdi’s opera Otello, here rendered as a jazz waltz). A masterful arranger, Spiegl has taken themes from throughout Puccini’s Tosca to create an 11-minute suite, featuring solos by trumpeter Ron Stout, tenor saxophonist Doug Webb and Waddell, whose use of distortion pedal gives the tune some unexpected grease.

Puccini’s Turandot has inspired dozens of pop culture performances—such as the renditions of “Nessun Dorma” sung by Aretha Franklin at the 1998 Grammy telecast and the instrumental version by Jeff Beck on his 2010 album, Emotion & Commotion—and now we can add Spiegl to the list. A highlight of his 12-minute suite, touching upon themes from throughout the opera, is Charlie Morillas’ gorgeous trombone work. Whether you’re a dedicated opera buff or a big-band fan with little interest in classical music, Spiegl’s album offers a wondrous world to explore.