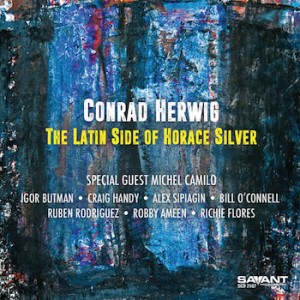 Trombonist Conrad Herwig has been building his acclaimed Latin Side series of recordings for 25 years, starting with The Latin Side Of John Coltrane in 1996. Now comes the eighth installment in the series, The Latin Side Of Horace Silver, a live recording on which Herwig and his all-star band refract the music of the DownBeat Hall of Fame composer and pianist through a prism of Afro Cuban and Afro Caribbean rhythms.

All eight tracks brim with authenticity and invention, embracing the layered syncopation, romantic longing and fiery excitement characteristic of a range of danceable genres that fall under the “Latin” umbrella. The tracks featuring Camilo stand out in particular. “Song For My Father,” which begins with trombone stating the tune’s iconic ostinato bass line, announces the virtuoso pianist’s presence with a lightning solo that sets the stage for further exuberant improv from Butman, Conrad and Flores. “The Gods Of The Yoruba,” a 5/4 piece that’s perhaps the least well-known of the bunch, spotlights Herwig’s singing horn during a rubato-like intro before the full band establishes a Caribbean-flavored groove and soloists Sipiagin, Camilo and Ameen take flight. The album closes with a sprint through the upbeat Silver standard “Nutville” that includes sizzling improvisations from Herwig, Handy, Sipiagin, Butman, Camilo and Flores. Other well-known Silver tunes getting the Latin Side treatment include “Nica’s Dream,” “The Cape Verdean Blues,” “Filthy McNasty,” “Silver’s Serenade” and “Peace.”

Unsurprisingly, Silver’s wide-ranging jazz compositions prove to be fantastic fodder for Herwig and company, lending themselves well to stylistic reinterpretation and go-for-the-throat blowing.