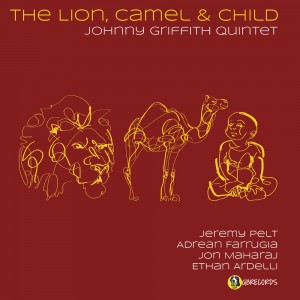 Honestly, the notion of “Nietzschean jazz” doesn’t sound like much fun. “Solos which do not kill us make us stronger,” and all that, right? Well, don’t get the wrong idea: The suite at the center of The Lion, Camel & Child is based on Nietzsche’s concept of the three metamorphoses from Thus Spoke Zarathustra. There, the philosopher offers the characters as metaphors for the spiritual stages of wisdom, perseverance and innocence, qualities Toronto saxophonist Johnny Griffith tries to capture. Representing a philosophical concept through music is a tough trick, but between Griffith’s command of motivic development and his quintet’s ability to spin ideas into emotionally simpatico solos, it’s not hard to “hear” the ideas at play. Pianist Adrean Farrugia is particularly adept, shading the harmony, so the circular themes remain in play, even as soloists move beyond them and trumpeter Jeremy Pelt embraces Griffith’s melodic syntax. Despite the lack of underlying narrative, the rest of the album handily maintains the joyful and cohesive performances, informed by a conversational interplay that suggests a great live band. Could it be that solos which kill us listeners only make the players stronger?